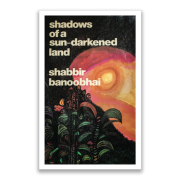 “Shabbir Banoobhai again gives us poems of an intense yet simple lyricism. The simplicity of Banoobhai’s poetry is deceptive. His language is simple, his words chosen with an almost austere delicacy. The meaning of his poems is immediately accessible and the emotional appeal direct. His images are the universal ones of land, sea and sky, used with a Biblical economy of detail. Yet the meaning of these poems often has a profundity that yields ever-widening rings of understanding, like a stone thrown into still water. Banoobhai’s strength lies in this combination of simplicity and universality. The most outstanding feature of the poetry is that it is infused with such clear intelligence … so that feelings become intelligence and intelligence, feeling…”

Eve Horwitz – University of the Witwatersrand

Echoes of my other self (Professor Colin Gardner)